Gazing at the Master an Ancient Practice

A Qudra seeker reports the following dream pertaining to the practice of gazing at the image of one’s Spiritual Master. This practice is found in all spiritual traditions and is referred to as Tasawwur e Shaikh in Sufic terminology. 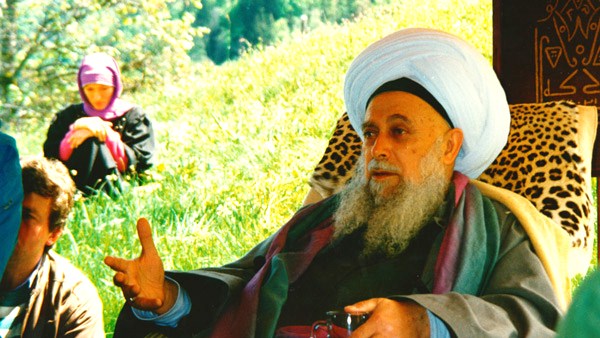 Last night before going to sleep i was thinking about Mawlana Sheikh Nazim, if he is with me , i mean if i am close to him or not. Was a bit sad. Also pondered over the mission of awliya Allah and Prophet saw I slept…then i saw a dream..i am in a place or home , there is a newspaper infront of me and it has news abt Mawlana. Suddenly i see that this picture comes alive, starting from his teeth to face and he smiles at me at says, ” Remember me in your heart” In the same place you are there, you had created a sacred space, there is a small candle beside sajjadah. That sajjadah has Shaikh Nazim’s image on it. I go and make sujood on it but when i make sujood i see a flap kind of comes on the top of sajjadah and his face gets covered , it is then when i make sujood. The prayer place which you made was very simple and clean.

Background on the practice of Tasawwur e Shaikh

In the Risala Qudsiyya, Khwaja Parsa writes while on his second trip to the Hijaz, the venerable Khwaja Baha al-Din Shah Naqshband ordered him to fix his blessed face in his imagination.

Muhammad Umar Birbali writes, “When a person reaches a certain station, people’s astral bodies can appear. Someone with a connection (nisba) to the Prophet can manifest as if he were physically present”. A disciple of Khwaja Hasan ‘Attar, the eldest son of ‘Ala’uddin ‘Attar (d. 803/1400), showed signs of spiritual attraction (jadhba) when visualizing the face of his shaykh. If the disciple could not be in the presence of the master, the venerable Mawlana ‘Abd al-Rahman Jami recommended that the disciple visualize the pir’s face in the heart while eliminating any distracting thoughts. The venerable Khwaja ‘Ubaydullah Ahrar, interpreting the Qur’anic verse “Be with those who are sincere and true” (kunu ma’ as-sadiqin[9:119]), indicated that one should outwardly be in the guide’s physical presence and inwardly have a bond with him (rabita). One unites sincerely with the shaykh’s face to develop continuous companionship with the lights of his lofty attributes and beautiful character, creating continual rabita, independent of physical proximity. In this way a person can develop an affinity (munasabat) with the mentor and arrive at the goal.

Ahmad Sirhindi incorporated this practice of visualization into the Mujaddidi system, especially when he perceived that persons had not controlled their egos sufficiently. He would order them to engage in rabita and visualize his face in their hearts, causing them to show visible signs of spiritual attraction: “Khwaja Burhan, one of the shaykhs of Dahbid who had already been initiated and received permission to teach (ijazat) from the notables of his locale, asked Imam Ahmad Sirhindi for spiritual guidance. Khwaja Burhan was surprised when Ahmad Sirhindi said for him to visualize his [Sirhindi’s] blessed face. His trusted companion informed him [Khwaja Burhan] that this exercise is suitable for beginners so that they can be taught the advanced contemplation’s (muraqabat). … After being convinced, he practiced this exercise for a day and became overpowered with a connection (nisba) with God to the point that he showed signs of extreme spiritual intoxication (jadhba).”

Naqshbandi elders have praised visualization of the shaykh as an effective technique for concentration, since humans cannot follow two directions at once or meditate with distracting thoughts. Keeping the picture of the shaykh in the state of recollection of God (dhikr) is the essence of causing recollection (tadhkir) because the remembered One exists in the presence of one [the shaykh] who does not heedlessly leave God for an instant.
It is much easier for beginners to concentrate on the face of the shaykh than on God. There is synergistic effect between the visualization of the shaykh and love of the shaykh which allows the seeker to open him-or herself to a trans-formative process activated by the pir’s character and actions. This in turn strengthens the seeker’s connection to God. Eventually the pir’s astral body (jism i-mithali) can be summoned.

When a living guide passes on, disciples continue the practice with the succeeding Master. Light is deposited in the new housing body, it is only the apparent that ‘changes’. The change is a veil as essentially the previous Master now ‘houses’ him/her self in body of the chosen inheritor. In the case of Shaikh Mehmet, millions of disciples now practice Tasawur  e Shaikh through his son.