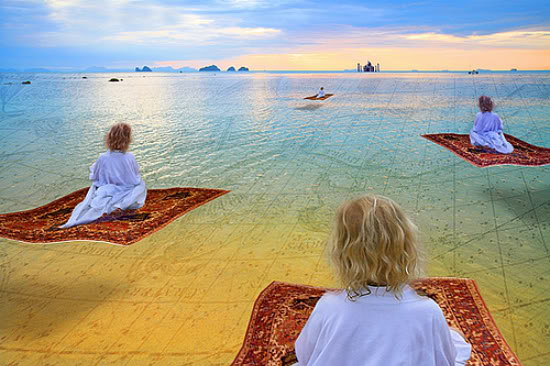 According to Dr Rick Strassman, author of DMT: The Spirit Molecule (also now a feature length movie), Dimethyltryptamine is a naturally occurring neurotransmitter similar in structure to serotonin. He theorizes that it is created in trace amounts by the pineal gland during normal metabolism, and may be released in massive amounts during birth, death, hallucinations and dreams. This psychedelic drug is found in many plants used by South American shamans. It is also used in certain religious practices, presumably for its ability to induce divine insights, visions and feelings of euphoria. Strassman’s studies have even linked high doses of DMT with the perception of alien entities from alternate realities. The DMT Experiments Between 1990 and 1995, Dr Rick Strassman studied the effects of this extremely short-acting yet intense psychoactive compound using human test subjects. The research generated a wealth of biological and psychological data, much of which was published in scientific journals. So Strassman decided to publish individual accounts from the human volunteers in his book, The Spirit Molecule. His DMT experiments shone a whole new light on unexplained phenomena such as alien abductions. Strassman even reproduced mystical and religious experiences with the psychedelic drug. Skeptics can say, then, that this drug is merely a hallucinogen. It makes you see things that aren’t there. And it explains thousands of historical accounts of paranormal phenomena in one fell swoop. On the other hand, the experiments provided new and startling information. Volunteers described bizarre visions of alien life forms – even subjects that wanted and fully expected to see angels and fairies saw other-worldly beings. It provokes the question: is DMT like a door to an alternate reality? Does it facilitate lucid dreams, the out-of-body state and glimpses into other dimensions?

Rick Strassman MD performed the first new human studies with psychedelic drugs in the US in over 20 years. His research involved the powerful naturally-occurring compound, DMT – N,N-dimethyltryptamine. Led to this substance through his earlier study of the pineal gland as a potential biological locus for spiritual experiences, he administered several hundred doses of DMT to approximately 60 volunteers between 1990 and 1995. He wrote about this research in the popular book, DMT: The Spirit Molecule, which has sold over 100,000 copies, has been translated into 12 languages, and is now available as an audio-book. It also inspired an independent documentary by the same name, picked up by Warner Bros distributing in Fall, 2011. With three distinguished collaborators, he co-authored Inner Paths to Outer Space, which looks more carefully at the common “other worlds” experience that volunteers frequently reported during his research.

Since 1996, Dr. Strassman has been exploring models for the DMT effect focusing primarily on the Old Testament concept of prophecy. Prophecy is a spiritual experience which takes into account the apparently external, free-standing nature of the DMT “worlds,” in which one’s sense of self is highly preserved and interactive. The Old Testament concept of prophecy provides an alternative to other models that borrow more heavily from Eastern religious systems, and those of Latin American shamanism. The notion of prophecy also deals directly with ethical and moral concerns, adding a crucial element to our ability to understand and integrate the content of the psychedelic experience. He is developing these ideas in his next book, The Soul of Prophecy, due to appear in 2013.

Dr. Strassman is currently Clinical Associate Professor of Psychiatry at the University of New Mexico School of Medicine. He is also President and co-founder of the Cottonwood Research Foundation